Video Magazine Exhibit and Much More

It's been a long time since we've had an article exhibit here at The Museum, so I went ahead and scanned an old magazine for your perusal. (As far as I know this magazine falls under the public domain, and if not, it's presented entirely in fair use.)


What was "Plan A" you ask? Godfather Part II, as we know it today, is actually Plan D. Briefly, here's the first three ideas presented by Coppola during filming:


Part II would have actually been two separate movies- The Godfather Part II and The Death of Michael Corleone. This version of Part II would have focused entirely on Vito's story, running well into the 1930s. De Niro put on 40 pounds to play this older Vito, and was publicly annoyed that it was all for nothing, as those scenes didn't make the final cut. A few stills exist, most notably the cover for Peter Biskind's Godfather Companion: 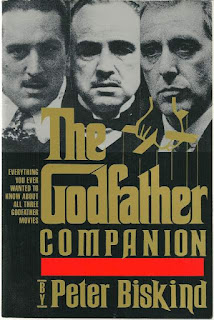 Surprisingly, Paramount loved the idea, but Coppola was apprehensive. (If you're curious to how this would have played out, Ed Falco's novel The Family Corleone was based on this storyline.) Coppola  wanted the movies to be more directly linked. In fact, he wanted the entire saga to be a whole, which brings us to:


After Coppola confirmed that he would be onboard for Part II, but before the first treatment had been finalized, he told Action magazine that this wasn't going to be your typical, everyday Hollywood sequel. He wanted to restore some of the cut scenes from Part 1, and bookend that film with the two stories of young Vito and older Michael. The "sequel" would be one long, continuous narrative very similar to what ended up as the TV Saga. Quote:

"The movie isn't a sequel in the Hollywood sense of the word. They're two distinct pieces that are formed together to make one story. They should be told together. I want the [Saga] to be an event... like, you have to call out sick and take the day off because you know you're going to be sitting in the theater for 8 hours!"

Understandably, Paramount nixed that idea immediately. His grand restructuring would have to wait a few years.


This was the rough cut, running anywhere between 5 and 6 hours depending upon the source.¹ What is known is that these were two, nearly three hour long films separated by an intermission. The first half chronicled Vito's rise, and the second half focused on Michael's demise.

By all accounts, Coppola was pleased with this structure. He knew it was long and would need to be trimmed, but overall felt comfortable with the two storylines occupying the same film. But by now he had begun toying with the idea of intersecting, parallel narratives.


¹Reports range from 5 hours to 6 hours as a running time for the Rough Cut.

This cut was test screened in San Francisco's Roxie Theater two months before its release. And it bombed.  It was perhaps the most disastrous test screening of a future screen classic aside from Star Wars.²

Instead of flashing back between stories every 10-15 minutes, Coppola instead decided to do so a handful of times. He excised the intermission, dropped the entré act, and cut a further 45 minutes. This version went on to become the final director's cut, which is what the rest of the world saw when they packed into moviehouses across the globe.

Another trivia item that some people don't know: Coppola opted to direct The Conversation in lieu of Godfather Part II and nominated either George Lucas or Martin Scorcese to direct it in his place. (Lucas served as assistant on the first Godfather and actually directed and edited the "newspaper headline" montage.) On the flip side, when 20th Century Fox balked at the idea of Lucas directing his own script for Star Wars, he nominated Coppola to produce and direct it. It makes you wonder what either film would have been like without their respective directors...

In modern mags, you may see a small advert for Adam and Eve or Penthouse.com in the back of the issue, or a very generic listing for 'marital aids' or something, but nothing like the late 70s to mid 80s. I guess the internet killed the need to advertise that stuff. 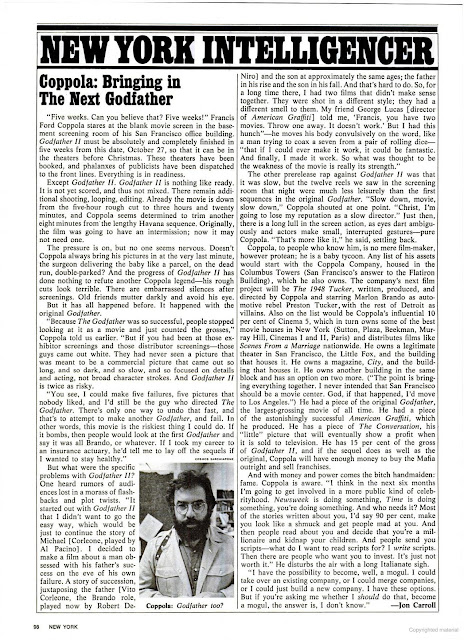 This was a quick writeup concerning the frantic post-test screening editing that was going on with Part II. Coppola has gone on record as saying that he was still editing the film just minutes before it printed and shipped to theaters.


It's interesting that at the time, his next project was going to be Tucker starring Marlon Brando. What the article didn't mention was the top-secret (at the time) finagling of the Apocalypse Now project. In 1969 Coppola had purchased the screen rights to Heart of Darkness, the novella by Joseph Conrad. He hired John Milius to write the film treatment for it, with future Jaws director Steven Spielberg directing. Milius's screenplay was much different than what Spielberg had imagined the film to be, and so dropped out early on, but not before suggesting George Lucas for the job based on the 'detached, sterile' approach he took toward the subject matter in his experimental short THX 1138.


Coppola paid Milius $15,000 to write the screenplay with the promise of an additional $10,000 for a rewrite if Warner Brothers or Universal greenlit it. When the studios backed out, Coppola rewrote it himself. The plan at the time was that he would produce and finance it, and George Lucas would direct, or co-direct with John Milius. After release, he and George Lucas would change places with Tucker, with Coppola directing and Lucas producing.


What happened next is disputed by the involved parties. What is known is that Lucas wanted to film it in black and white 16mm- a throwback, arthouse-take on the old newsreels of the WWII era. Coppola thought it was a good idea, but this is what reportedly caused all of the major studios to pass on the film. Coppola was undeterred, and began pumping his own money into the project. Steve McQueen and Burt Lancaster were attached early on. And then one by one, everyone dropped out of the project, leaving just Coppola alone holding the reigns.


George Lucas has said that he dropped out of the project because he felt that his take on the film would have been 'box office poison' and he didn't want to further bankrupt Coppola and American Zoetrope. Coppola didn't see it that way. He felt that George, somewhat selfishly, decided to pursue The Star Wars with Fox and so reneged on his agreement to direct Apocalypse. This of course led to the Tucker project gathering dust for the next 12 years as the two men didn't speak to each in the meantime.

Coppola's suspicions (that Lucas cared more about Star Wars than Apocalypse) were confirmed, at least in his mind, when he viewed the rough cut of Star Wars with a group of fellow directors, among them Spielberg, Milius, Brian De Palma, Martin Scorcese and Paul Schrader. All of the old newsreel footage of WW1 and WWWII fighter pilots engaged in aerial dogfights (which Lucas said he wanted to mimic for Apocalypse) were shown in place of the special effects shots that would later astound audiences in the finished film. Coppola took it personally, and felt insulted.After he and the other viewers (save for Spielberg) told Lucas that his film was going to bomb, Coppola and Lucas spent the next decade taking polite jabs at each other in the press.


Their friendship was renewed when Lucas heard about Coppola's bankruptcy. In order to save Coppola from losing his house and vineyard, Lucas offered to buy the property from Coppola and sell it back to him when he got back on his feet. The bromance was rekindled and within a couple of years, the two released Tucker: A Man and His Dreams to mixed, but generally favorable reception. Brando, of course, was so out of shape and had caused Coppola infinite stress on Apocalypse that he was not asked to portray the title character, the role instead going to Lucas's first choice, Jeff Bridges.


**Special Request from the Godfather Museum**

The most-viewed article in this blog is A Brief History of the Chronological Cuts. Since the writing of that article, and the announcement of our fanedit preservation project, a number of other fanedits have come about. I'd like to update that article with a list of the different fanedits and a general description of them. Since I'm up to my neck in stuff to watch, I've not personally seen any of these other edits such as the Hal9000 version. If our readers could get a list going in the comments section I'll be happy to update that article.